The greenhouse climate in the pressurized greenhouse of Dümmen Orange in Rheinberg, Germany, was initially far from optimal. This had negative consequences for both the crop and employees. To achieve a more active climate, the breeding and propagation company invested in vertical distribution fans.

Dümmen Orange’s location in Rheinberg is the heart of the international company. This is because 150 different types of mother plants are grown here, which serve as the basis for the propagation of cutting material. “These cuttings go to our branches all over the world to be cultivated there,” says Christiaan Rinkel. The Dutchman has been responsible for all cultivation matters at the site in Rheinberg for several years.

Rinkel saw creating more air movement as the solution. He therefore decided to expand the existing system of horizontal blowing hoses from VB Climate Technology with vertical distribution fans from Hinova. “We use the blow-in hoses to suck in outside air, which is then vertically introduced into the greenhouse by means of holes in the hoses. But this was not enough to bring the air to the bottom of the crop. That is why vertical fans were a must. ” The cultivation manager experimented with three types of vertical fans. Ultimately, the choice fell on the Hinovator. “This was the best price-quality ratio,” says Rinkel. “Ultimately, we installed blow-in hoses with these fans in all our departments; five per department. The various systems were fully operational in July. ”

The grower does not regret the investment made. The blow-in hoses in combination with the vertical fans ensure more air movement and a more active and more uniform greenhouse climate. “This is first and foremost good for our employees. They are happier and productivity is higher. The crop dries up faster, for example after misting. As a result, we have less to do with fungi and other cultivation issues. ”

Another advantage, according to Rinkel, is that the cuttings are hardened off better. The extra air movement leads to more effective evaporation. “This ensures that our cuttings thrive even better in the various growing locations in the world. In short: a more active greenhouse climate yields multiple benefits. ” Although the installation has a clear added value, according to the cultivation manager it still has to prove itself further. “In addition, the fans are not yet linked to the climate computer. They now invariably run at 70 percent of maximum capacity. We want to realize that link in the coming years, in order to make even more profit. ” Rinkel cannot name disadvantages. “It is also funny that the fans have a German motor, while the design comes from the Netherlands. That fits perfectly with my situation, as a / Dutch person in a German company. In both cases, the Netherlands-Germany is a great combination. 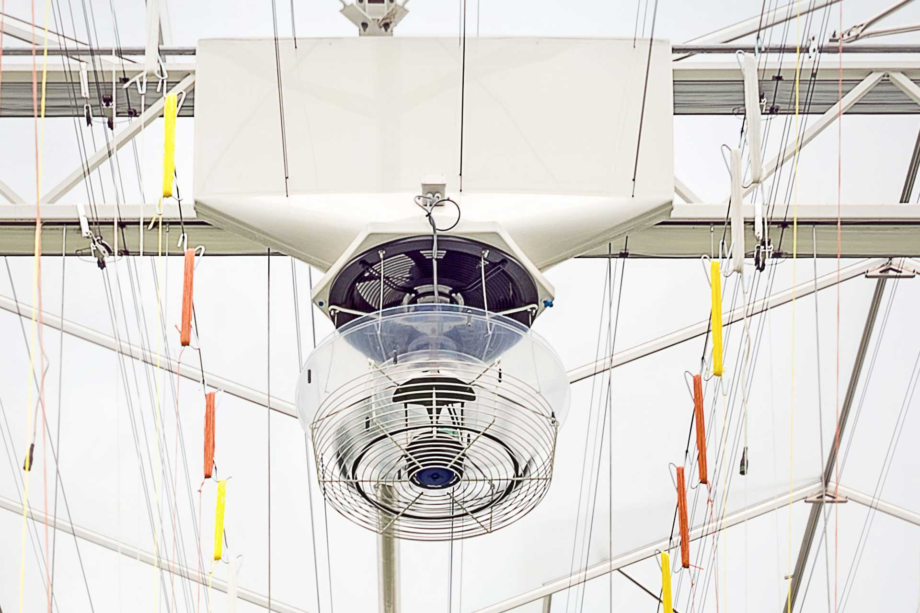 Ventilation in a greenhouse is an important aspect for a healthy crop. We have already been able to help many growers with an optimal greenhouse climate. To provide you with more information about our product and services, we have listed the most frequently asked questions about greenhouse ventilation:

If there is too much moisture in the greenhouse under the screens, for example due to evaporation from the plant, a screen fan can positively influence the climate with a natural process.

By blowing colder and drier air from the space above the screen into the greenhouse, an exchange of air occurs. The ventilation rate determines at what difference you can apply the system.

The screens are made to let humid air pass through. This way a better climate is created underneath the screen.

The screen ventilation is controlled by the climate computer. The temperature and humidity in the greenhouse are measured at various locations. When the set condition is met, the Jets will turn on.

By drawing in colder air, the Jets becomes cold. The more humid ambient air will condense on the surface of the installation. The VentilationJet is equipped with a collection gutter and drain to prevent dripping on the crop.

Yes, if you purchase our VentilationJet system®, you can keep your screens completely closed. This saves you a lot of energy and prevents temperature differences through screen gaps.

The exact number depends on your crop, your environment and the number of screens. We can calculate the required number for you. In the vicinity of the Netherlands, tomato cultivation needs about 20 Jets per hectare.

We use the Hinovator to properly mix the air blown in. The mixed air is then recirculated through the crop. So not over it, but through it. This greatly improves the microclimate of the plant.

Have any further questions? Do not hesitate to contact us, our specialists are happy to help. 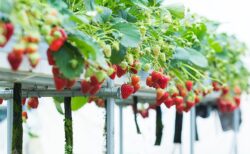 Greenhouse ventilation is the answer to many of the challenges you face in strawberry cultivation. With an optimal greenhouse climate you prevent condensation on the fruits and all unpleasant consequences such as fungi and other diseases. In this way it ensures a drier and more active crop and thus a healthy and resilient product. How we can help you with this? We are happy to tell you.

If there is condensation on the plant, the plant will no longer be able to evaporate. The air around the leaves is saturated with moisture. This means that there is no supply of fresh nutrients. In addition, the condensation is a breeding ground for fungi such as Botrytis. These can more easily penetrate and infect the plant tissue.

All advantages at a glance

Current experiences speak for themselves

Several strawberry growers have already preceded you. One of the growers we have already been able to help is Cox strawberries in Horst. The results say it all: “We are very satisfied with the Hinovator. We grow more generatively, we have a stable climate which ensures an active plant. Since using the Hinovator we have noticed that we have a more active crop, we have a higher water absorption. ”

Investing in sustainability and greenhouse ventilation does not have to be a complicated and expensive cost item. Do you also want an optimal greenhouse climate and enjoy all the benefits of our smart systems? Then contact us today. We are happy to help you.

If you are familiar with Hinova, chances are that you know us about our vertical ventilation systems. However, as ‘tech geeks’ we are also working on other developments for greenhouses behind the scenes . “How can we make it easier for the horticultural entrepreneur.” is the question that drives us every day and has brought two new products in the field of sensor technology. Sensors are the senses of a glass garden. These measuring instruments influence the automation and you want it to be as accurate as possible, and keep it that way. You can read more about our related products below. and How you can receive free entrance tickets for Greentech 2019 in the RAI in Amsterdam.

PAR sensors measure the amount of µmol per second in a specific part of the light spectrum that benefits the plant for photosynthesis. However, this sensor is very sensitive and wears after prolonged exposure to light. With an inaccurate measurement as a result. This sensor must then be sent out for calibration or replaced. Exchanging it for maintenance ensures a lot of unnecessary work. Our PAR calibration source is a light source which gives a very constant PAR value. If you place this over the sensor, you can compare the value that comes in on the climate computer, and then correct the deviation with just a few mouse clicks. This saves you a lot of work and the sensor can go along for another round.

In greenhouse horticulture, several companies are looking for accurate sensors for the greenhouse. Our sensor can also measure CO2 in addition to temperature and humidity. The values ​​are sent over the wireless network to the climate computer or server. Unique to this product is that it communicates over the existing network of the VentilationJet system. The combination of moving air and reliable components ensure an accurate measurement.

You will also find us again this year in the RAI in Amsterdam between 11 and 13 June during Greentech. In addition to our fans, you can also take a look here at our aforementioned developments. We are of course ready for all your questions, so ask them. Don’t have access tickets yet? then you can get it here for free. You can find us this year at booth number 08.109